Alexa In The Enterprise: The Rise Of Voice-Activated Assistants

One Year After Alexa’s Rollout Into Business, A Look At The Pros And Cons

There’s no denying the correlation between the technologies that employees use at work and the ones that they use as consumers. The more often that people use certain technologies at home, the more likely those technologies will someday permeate the workplace. We’ve seen this with mobile devices, and now we are starting to see it with voice-activated virtual assistants.

This week marks the one-year anniversary of when Amazon announced at AWS re:Invent 2017 that it was rolling out a workplace version of Alexa, its popular artificial intelligence-based assistant. Called Alexa for Business, Amazon has been promoting the service during the past year.

This isn’t the only voice-activated assistant in the market. Other competitors in this space include the Google Assistant, Siri (Apple), and Cortana (Microsoft). Users can access the technology via smart speakers and mobile devices.

With the one-year anniversary of Alexa for Business, let’s examine the current state of voice-activated assistants in the enterprise.

Benefits Of A Voice-Enabled Workplace

PSCU, the nation’s largest credit union service organization, is one of many organizations that use Alexa for Business. For example, its operations team uses the Echo Spot for conference calls.

“I think they are great, with the new business features that Amazon AWS has put out, and its good for scheduling, linking email, calendars, voice and video calls,” said Rene Clayton, PSCU’s strategy and product development leader.

Adopting Alexa For Business On A Wide Scale

Voice assistant technology has been on the radar of Saint Louis University for nearly a year. This fall, it became the first university in the country to place an Amazon Echo Dot in every student residence hall room or apartment on campus. Over 2,300 devices were deployed to the students — and all devices are leveraging the Alexa for Business service.

Within just the first week, 75% of the devices in the rooms were used at least once. Three months later, those devices have been used over 90,000 times. The most popular uses of the devices are for general knowledge, music, and other reminders. With the success of the program for students, Saint Louis University is exploring the possibility of rolling out the technology to its staff.

“It's one of our next phases that we're working on with a proof of concept right now with AWS,” said Saint Louis University’s Vice President and CIO David Hakanson.

“We see this as being a key component of the ecosystem going forward, where you can ask for information that helps you focus your time on deeper thought,” said Kyle Collins, the university’s assistant vice president of technology transformation. “We kind of feel like in our goals of striving to be an innovative institution, that this is the right time for us to be involved and invested in influencing the future of the technology.”

Despite the many benefits of using voice-activated assistants at work, there are several challenges to adopting it. Some of the concerns with the technology include authentication and security.

Anurag Sharma, principal of WithumSmith+Brown's cybersecurity consulting practice, told the Journal of Accountancy that adequate security controls are usually ignored while deploying these devices. He said that it would be easy for individuals to “exploit” the devices and record conversations on them.

“The barriers to adoption right now are first making sure that we have personalization to the right datasets and the right security around that,” said Hakanson. “And then second, the right identity verification and authentication into the device itself.”

With all of these challenges and barriers, some organizations that were planning to use the technology are now taking a step back. Just this week, it was revealed that WeWork is discontinuing a two-month pilot that was designed to test Amazon’s Alexa for Business. Neither company revealed the reason for suspending the partnership.

Outlook Of This Technology In The Workplace

Despite the risks with voice-activated assistants, enterprises are still exploring use cases of the technology. For those organizations that are considering these solutions, Hakanson offered some advice before proceeding.

“Collaboration is critical, in my opinion, to not only that stakeholder, but the ability to deploy and support,” Hakanson said. “The second item that I mention really comes down to the partner ecosystem. I think the two things are making sure that that there is a stakeholder in the organization that is on board and supportive of this and will help champion it from the business side, and then making sure that you have the right partners in place with the right infrastructure.” 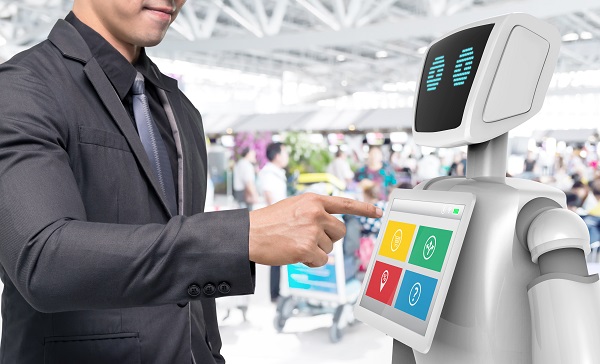