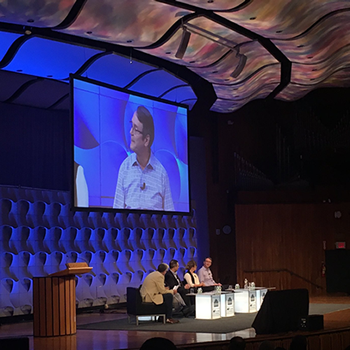 Not surprisingly, “AI,” “digital transformation,” “disruption” and “innovation” were the big buzzwords at MIT Sloan's annual CIO Symposium Wednesday. Although the main themes were not new: blending digital teams with business people, a shortage of data scientists, the need for continuous learning and opening up systems and becoming more agile – these were among some of the speakers’ top challenges.

Another constant theme that reverberated with the crowd: it’s not easy being a CIO today. No longer are CIOs and IT leaders merely responsible for “keeping the lights on.” In addition to budget pressures, customer expectations and operational responsibilities, they have to adapt to technologies that are constantly evolving and a generation of workers and customers who have never known life without mobile devices.

Most companies today have on average, close to two CxO-level digital leaders or more, according to McKinsey, which provided research at the symposium. When that happens, though, the lines can get blurred on who owns which digital functions and which technologies. One-third of respondents did not know which leader was responsible for digital functions such as app development and infrastructure operations in their organization, a recent McKinsey survey of more than 700 executives revealed.

“Appointing a chief digital officer doesn’t necessarily make a company more effective in developing and deploying digital solutions,’’ the firm noted. It can sometimes have the opposite effect and lead to confusion and power struggles.

How to be an effective CIO

There are five things great CIOs do, noted Stephanie Woerner, a research scientist at  MIT’s Sloan Center for Information Systems Research, speaking during a track entitled “What is your Digital Business Model?” They are:

These CIOs will also seek IT-business alignment from the top down, so the further the strategy gets into an organization it becomes seamless and unnoticeable, added Peter Weill, chairman of the MIT Sloan Center for Information Systems Research.

As enterprises endeavor to create next-gen digital platforms for business differentiation, the onus is on the CIO to make sure they are constructed as quickly as possible, yet also executed safely. IT departments “are often not aware of how users are using software” on a day-to-day basis and are not connecting the dots throughout the software stack, observed Frederic Veron, CIO and head of safety and soundness at Deutsche Bank. “Sometimes we don’t do enough of that,” and will just make the assumption that a platform is operationally ready, he said.

Veron urged attendees to “go beyond DevOps” and to “fail and learn fast … We need to know our software better than before” to provide real value to customers.

Good business digitalization requires “safe and sound software” that is adaptable; resilient; secure; safe; properly tested; operationally ready and architecturally sound, Veron said. The more IT measures, he added, the better the software. The same holds true for partners, he said, noting that most of Deutsche Bank’s software developers work for third parties.

Veron said his IT group is doing “risk scoring,” by taking data from all systems and applying scores based on incidents to improve software quality.

During a track on implementing AI, David Gledhill, Group CIO and head of group technology & operations at DBS Bank, told the audience only somewhat tongue in cheek that “We’re at war, and digital is the way to win.” The bank’s objective is to scale exponentially into new markets with AI, he said, adding that implementation is not the hard part. “The challenge is, once people use [AI] they get wild expectations about what they can do.”

Right now, the bank’s IT staff is thinking about how to leverage AI in different markets and “get to the art of what’s possible,” he said. The goal is to also detect issues customers might have on the bank’s website, such as slow response times and driving them away, before they happen.

To solve the talent shortage while deploying AI systems, “You have to hire people with curiosity,” who don’t believe in just one way to solve a problem, said Cynthia Stoddard, senior vice president and CIO at Adobe. In terms of providing a good customer experience, she said Adobe is also applying AI and analytics to gain visibility into whether customers are aware of product features and know which one is best to meet their needs.